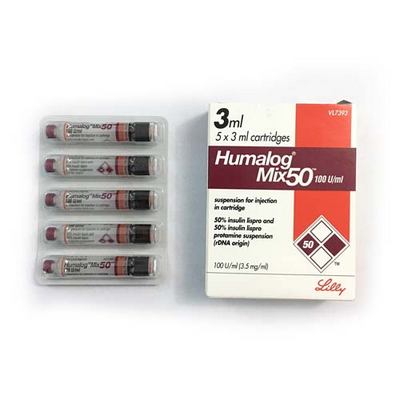 Humalog Mix50 is indicated for the treatment of patients with diabetes mellitus who require insulin for the maintenance of normal glucose homeostasis.

he dosage should be determined by the physician, according to the requirement of the patient.

The rapid onset and early peak of activity of Humalog itself is observed following the subcutaneous administration of Humalog Mix50. This allows Humalog Mix50 to be given very close to mealtime. The duration of action of the insulin lispro protamine suspension component of Humalog Mix50 is similar to that of a basal insulin (NPH [isophane]).

The time course of action of any insulin may vary considerably in different individuals or at different times in the same individual. As with all insulin preparations, the duration of action of Humalog Mix50 is dependent on dose, site of injection, blood supply, temperature, and physical activity.

Insulin requirements may be reduced in the presence of renal impairment.

Administration of Humalog Mix50 to children below 12 years of age should be considered only in case of an expected benefit when compared to soluble insulin.

Subcutaneous administration should be in the upper arms, thighs, buttocks, or abdomen. Use of injection sites should be rotated so that the same site is not used more than approximately once a month.

When administered subcutaneously care should be taken when injecting Humalog Mix50 to ensure that a blood vessel has not been entered. After injection, the site of injection should not be massaged. Patients must be educated to use the proper injection techniques.

Ratings & Reviews
No review
Check our pricing section for Humalog Mix50 cartridge 1pc price in Bangladesh. After Submitting Order, You will receive a phone call for verification, price and delivery confermation. We deliver inside/outside Dhaka (Delivery all over Bangladesh). We offer express/urgent medicine delivery inside Dhaka. Do not forget to check discount/cashback offers if you are eligible to avail any.