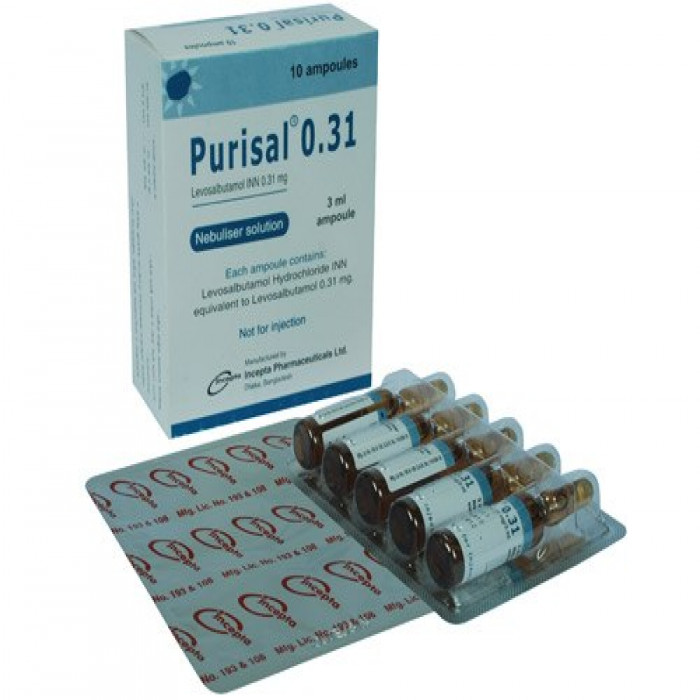 Levosalbutamol Nebuliser Solution or Inhaler  is indicated for the treatment or prevention of bronchospasm in adults, adolescents, and children with reversible obstructive airway disease.

Activation of &beta 2 adrenergic receptors on airway smooth muscle leads to the activation of adenylcyclase and to an increase in the intracellular concentration of cyclic AMP. This increase in cAMP leads to the activation of protein kinase A, which inhibits the phosphorylation of myosin and lowers intracellular ionic calcium concentrations, resulting in relaxation. Levosalbutamol relaxes the smooth muscles of all airways, from the trachea to the terminal bronchioles. Levosalbutamol acts as a functional antagonist to relax the airway irrespective of the spasmogen involved, thus protecting against all bronchoconstrictor.

This Nebuliser Solutionis supplied in unit-dose ampoules and requires no dilution before administration by nebulization.

Beta-blockers: Beta-adrenergic receptor blocking agents not only block the pulmonary effect of beta-agonists such as Levosalbutamol Nebuliser Solution or Inhaler, but may also produce severe bronchospasm in asthmatic patients. However, under certain circumstances, e.g. prophylaxis after myocardial infarction, there may be no acceptable alternatives to the use of beta-adrenergic blocking agents in patients with asthma. In this setting, cardio selective beta-blockers could be considered with caution.

Diuretics: The ECG changes and/or hypokalemia that may result from the administration of non-potassium sparing diuretics can be acutely worsened by beta-agonists when the recommended dose of the beta-agonist is exceeded.

Digoxin: It is necessary to carefully evaluate the serum digoxin levels in patients who are currently receiving digoxin and Levosalbutamol Nebuliser Solution or Inhaler.

Levosalbutamol Nebuliser Solution is contraindicated in patients with a history of hypersensitivity to Levosalbutamol Hydrochloride or racemic salbutamol.

Potentially serious hypokalaemia may result from beta 2 – agonist therapy. This effect may be potentiated by hypoxia. Other side effects such as palpitation, fine tremors of the skeletal muscle (particularly the hand) and muscle cramps may occur. In few cases nervousness, headache, dizziness, fatigue and sleeplessness have also been reported.

Lactation: It is not known whether Levosalbutamol is excreted in human milk. Caution should be exercised when Levosalbutamol Nebuliser Solution is administered to a nursing woman.

The expected symptoms with over dosage are those of excessive beta-adrenergic receptor stimulation and/or occurrence or exaggeration of any of the symptoms listed under side effects. Treatment consists of discontinuation of Levosalbutamol Nebuliser Solution or Inhaler together with appropriate symptomatic therapy. The judicious use of a cardioselective beta-receptor blocker may be considered.

Store below 25°C. Protect from light. Do not refrigerate.

Ratings & Reviews
No review
Check our pricing section for Purisal Nebuliser Solution (0.31mg/3ml) 10pcs price in Bangladesh. After Submitting Order, You will receive a phone call for verification, price and delivery confermation. We deliver inside/outside Dhaka (Delivery all over Bangladesh). We offer express/urgent medicine delivery inside Dhaka. Do not forget to check discount/cashback offers if you are eligible to avail any. 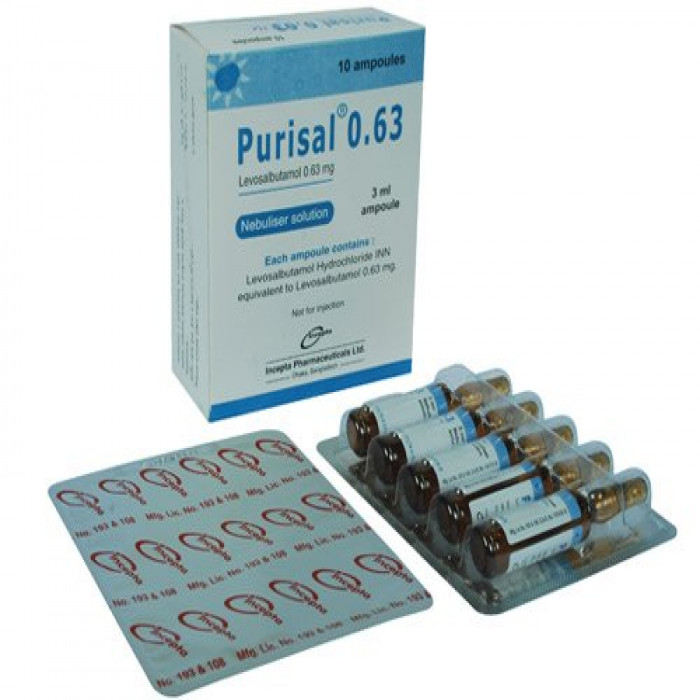