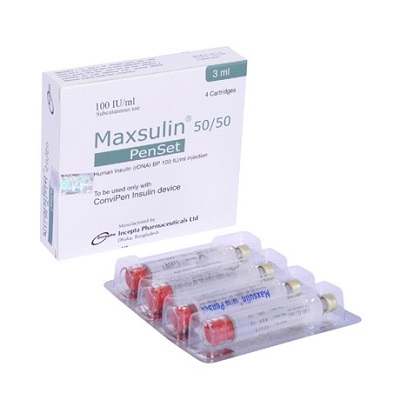 In diabetic patients with diabetic ketoacidosis, hyperosmolar non-ketotic syndrome, and during periods of stress such as severe illnesses or major surgery, for the first stabilization of diabetes. Preventing and treating gestational diabetes.

Insulin Human (rDNA) is a recombinant DNA-produced human insulin. Its structure and function are identical to that of natural insulin. Insulin is a hormone that regulates glucose metabolism and increases glucose absorption and utilization by the liver, muscle, and adipose tissue. It also decreases blood glucose levels by speeding up glycogenesis and slowing down gluconeogenesis.

The average range of total daily insulin requirement for maintenance therapy in type 1 diabetic patients lies between 0.5 and 1.0 IU/kg. In pre-pubertal children it usually varies from 0.7 to 1.0 IU/kg, whereas in insulin resistant cases, e.g. during puberty or due to obesity, the daily insulin requirement may be substantially higher. Initial dosages for type 2 diabetic patients are often lower, e.g. 0.3 to 0.6 IU/kg/day.

The dosage form, the dosage and the administration time of the insulin are different due to the individual differences of each patient. In addition, the dosage is also affected by food, working style and exercising intensity. Therefore, patients should use the insulin under doctor's instruction.

Patients with hypoglycemia or who are allergic to insulin or any of the excipients.

Hypoglycemia is the most prevalent side effect of insulin therapy, and symptoms of hypoglycemia can strike without warning. There have been a few reports of adverse reactions such as redness, swelling, and itching. It normally vanishes after a few days. In other cases, other factors, such as disinfectant or poor injection technique, may be to blame for the allergy rather than insulin.

Insulin treatment for diabetes is not restricted during pregnancy since insulin does not cross the placental barrier. The infant is not at risk from the mother's insulin medication.

Hyperglycemia can result from insufficient dose or withdrawal, especially in those with type 1 diabetes. If the insulin dose is excessively high in comparison to the insulin need, hypoglycemia might result. Hypoglycemia can be caused by skipping a meal or engaging in unplanned, severe physical activity.

Refrigerate between 2°C and 8°C. Do not allow yourself to become frozen. If you don't need to refrigerate insulin for immediate use, keep it in a cold place away from heat and light. Insulin can be stored at room temperature for up to a month.

Ratings & Reviews
No review
Check our pricing section for Maxsulin 50/50 penset 100IU/3ml 1Pc price in Bangladesh. After Submitting Order, You will receive a phone call for verification, price and delivery confermation. We deliver inside/outside Dhaka (Delivery all over Bangladesh). We offer express/urgent medicine delivery inside Dhaka. Do not forget to check discount/cashback offers if you are eligible to avail any. 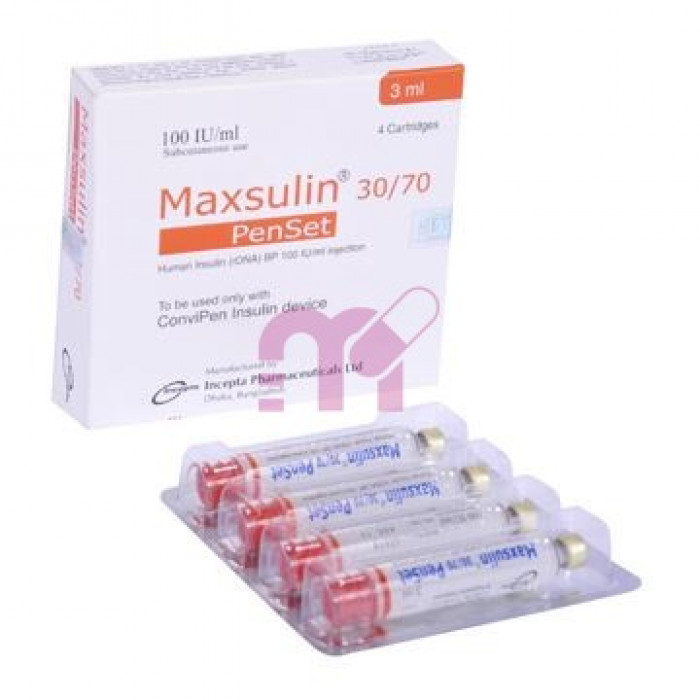