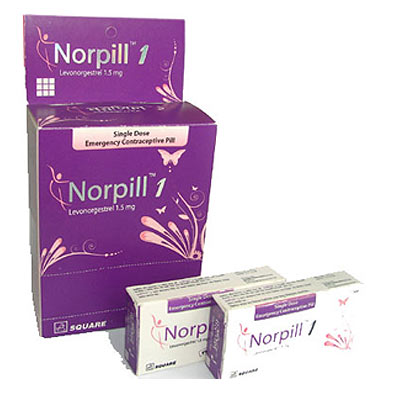 NorpillTM 1 is an emergency contraceptive pill for women. NorpillTM 1 should be used within 72 hours of unprotected intercourse. It should not be taken as regular birth control pill. This medicine is also known as morning after pill. Each NorpillTM 1 tablet contains Levonorgestrel BP 1.5 mg. Levonorgestrel belongs to a group of medicines called progestogen.

When emergency contraception is used? This contraception is used as soon as possible, preferably within 12 hours and no later than 72 hours (3 days) after the unprotected sexual intercourse, particularly • If you have had a sexual intercourse whereas either yourself or your partner did not use a contraceptive method • If you have forgotten to take consecutive 3 regular contraceptive pills • If your partner’s condom has broken, slipped or been improperly removed or if he has forgotten to use it • If you fear that your intrauterine device has been expelled • If your vaginal diaphragm or your contraceptive cap has moved or if have removed it too easily • If you are afraid that the method of coitus interruptus has failed or if you have had sexual intercourse during the period when you are supposed to be fertile while using the rhythm method • In the event of rape

How should this medicine be used? The treatment necessitates the intake of one tablet. One NorpillTM 1 tablet must be taken as soon as possible preferably within 12 hours, after the unprotected intercourse and no longer than within 72 hours (3 days) after the intercourse. NorpillTM 1 can be taken at any moment during the menstrual cycle. After using an emergency contraception, it is recommended to use a local contraceptive mean (condom, spermicide, cervical cap) until the next menstrual period resume. The use of NorpillTM 1 does not contraindicate the continuation of regular hormonal contraception. If you have used this medicine while you were using an oral contraception (contraceptive pill), you should carry on taking the usual tablets until the end of the treatment. In case no menstrual period occurs in the next pill free period following the use of NorpillTM 1, a pregnancy test should be performed to rule out a pregnancy.

Method and route of administration: One tablet should be taken orally with a glass of water.

What should you do if you take an overdose? No acute toxicity has been demonstrated with this medicine in case of intake of several doses.

Precautions When should you not use this medicine? If you have hypersensitivity to Levonorgestrel.

Special warnings and precautions for use: Emergency contraception must be used exceptionally, since • It does not allow to prevent a pregnancy in every instance • The associated hormonal overdosing is not advisable in case of regular intake • It cannot replace a regular contraception After taking Levonorgestrel, menstrual period usually occurs at the expected date nevertheless, it can occur earlier or later by a few days. After taking this tablet, it is therefore mandatory to check the absence of pregnancy by performing a pregnancy test in case of abnormal bleeding at the date of expected period or in case of menstrual delay of more than 5 days. The use of emergency contraception does not replace the necessary precautions against sexually transmitted diseases and the measures to be taken in case of risk of transmission. If vomiting would occur within 2 hours after taking this medicine it is recommended to take immediately another Levonorgestrel tablet.

Interaction with other medicines and other forms of interaction: Simultaneous administration of certain anticonvulsant agents (phenobarbiton, phenytoin, primidone, carbamazepin), also other medications such as rafimpicin and griseofulvin can reduce or suppress the effectiveness of this emergency contraception.

Pregnancy & lactation: The medicine is not indicated in case of pre-existing pregnancy and cannot interrupt it in case of failure of this contraceptive mean with persisting pregnancy. Epidemiological studies indicates no adverse effects of progestogen on malformation of a fetus. Lactation is possible. However, since Levonorgestrel is secreted into breast milk it is suggested that you breast feed immediately before taking each tablet and that you skip nursing following each Levonorgestrel tablet administration.

Side effects: Undesirable effects which have been observed are: • Nausea and vomiting • Dizziness, fatigue, headache • Abdominal pain • A feeling of breast tenderness • Bleeding can occur after taking this medicine Inform doctor of any unwanted effect which is not mentioned here.